One of the hallmarks of reform in science education deals with finding pedagogical approaches that can correct misconceptions in students' understanding of scientific ideas. Much of the work in the modeling instruction program attempts to confront students' naive views of the physical world and motivate them to adopt a correct conceptual framework for scientific ideas. Today's article discussion centered around an extensive inquiry by Vanessa Barker into students' misconceptions of chemical concepts. Barker's manuscript reviews the literature on misconceptions in chemistry as well as generates ideas from student interviews. Her concluding reflections on best practice with regard to correcting and avoiding misconceptions in chemistry education indicate several areas where instruction should focus conceptual understanding.

In reviewing and discussing Barker's work, we noted several areas where we felt Barker's work was most compelling, including:
According to Barker, teaching using multiple modes of thinking about chemical ideas, including symbolic, diagrammatic, and quantitative representations, can lead to a more solid understanding. For example, when performing stoichiometric calculations, it could be helpful for students to draw particle diagrams that represent the balanced equation before attempting to solve quantitative calculations. This can help them to keep their problem-solving attached to what is physically happening in the reaction and understand better what is taking place. With regard to concepts that could otherwise be quite nebulous to introductory students, such as energy and entropy, having a visual representation can help students bridge the gap between concrete and abstract thinking. All in all, everyone agreed that despite their best traditional approaches to instructional delivery in these areas, a fair number of students still came away from lessons with misunderstandings. This helped all of us to agree that a different approach is necessary--that's why we're taking this course in modeling instruction, right!?

After our poignant discussion of misconceptions in stoichiometry, it was on to developing a concept of the mole based on experimental evidence and following the same discovery sequence that historically took place in chemistry. We learned to "count by massing" with an activity that applied Avogadro's hypothesis to prescription bottles full of different types of hardware. In doing so, we developed a mass to quantity relationship and learned that it was different for different substances. We were also able to find mass ratios, and relative masses, for the hardware. We then moved on to apply this new found understanding to conduct an empirical formula lab with zinc chloride. 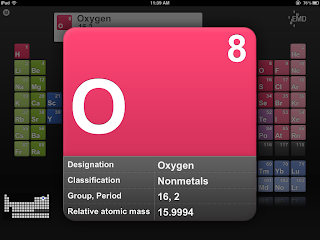 *There are other free periodic table iPad apps, which are also very good, including one by NOVA.

The empirical formula lab is often done in chemistry classes of various levels as a verification lab (a lab done simply to verify a conclusion that has already been communicated to students) as opposed to an inquiry-based lab (one where the students empirically arrive at the conclusion that would otherwise be directly communicated.) However, in this sequence, the mass and particle ratios, including relative atomic mass, and empirical formula determination are all done before teaching nomenclature and complete formula writing. Typically, nomenclature and formula writing are usually taught using a model of bonding that is based on electric charge; historically however, derivation of empirical formulas was possible before a solid understanding of charge and bonding based on charges was part of the communal knowledge. The modeling sequence gives students a more concrete foundation for the physical ratios of particles in compounds and in the fully uncovered formula writing that will follow later in the curriculum.

The rest of the day focused on stoichiometric "conversions" between mass, moles, and number of particles. This was an area that the article, which we earlier discussed, had noted is part of a stoichiometric pitfall of understanding for students. I put conversions in quotations here, because the ones we do in stoichiometry are not really true conversions, because they "convert" between units of different quantities and not units of the same quantity, e.g., converting from feet to meters is a length-length conversion since they are both units of length, but converting from meters to pounds (length-weight) would not be a true conversion since they measure different quantities.

We considered different approaches to working out these "conversions," but most teachers fell back on the factor-label method. As a group, we were tasked with embedding student mistakes into our whiteboards of the stoichiometry problems, and then to practice teacher questioning with each other when we led the whiteboard session; however, it was a struggle for us to generate naive mistakes in our problem-solving and truly think like students.

As chemistry teachers, we have had lots of practice with calculations and become very facile with them. Most of us can think problems through using a factor-label approach, but that is because we are at formal operations stage of thinking and development, cognitively speaking. Our "strug-fest" with generating student errors was a consequence of being unable to really empathize with a student who could not understand the factor-label algorithm. Some of us, literally, could not fathom how a person wouldn't understand what is often called, "dimensional analysis." We come to fall victim to our own retrograde amnesia, where we cannot remember what it was like to not understand how to do dimensional analysis using factor-label method. Factor-label seems easy enough, but often doesn't require any true understanding of what the situation entails if you can match up the labels with the factors properly to solve for the desired unit.

This led to a concluding debate about how to do stoichiometric problems and issues surrounding them for students:
These are all very valid questions about how to teach these conversions, and they will later be applicable questions when we get to stoichiometry that relates to determining product mass, for example, based on given initial conditions, or the like of which students often flounder or flourish.

Could we somehow make the process of stoichiometry more concrete for students at first, then allowing those who can "do the math" more easily take off on their own factor-label adventure? I propose that "for every" statements are a concrete solution to making stoichiometry more accessible to students, because it makes the proportional reasoning more intuitive and keeps them ground in the physical situation. Then, every aspect is done as multiple individual steps, but can be transitioned into combined one-step solutions that encompass factor-label algorithms once they understand what it is that they are actually doing. After all, aren't we in this to help students to succeed and not just allow the ones, who would otherwise do so anyway, to proceed?

Here, I describe a more cognitive approach to stoichiometry "conversions," which can be a lead-up to using factor-label method and can benefit all students, especially those who have difficulty with proportional reasoning, it deals with using "for every" statements to work with stoichiometry.