The main focus of today was quantifying energy transfer while keeping a strong connection between macroscopic observations of an associated change. In the modeling chemistry curriculum framework, the quantitative treatment of energy is an outstanding pedagogical approach that helps students critically think their way through specific heat and phase change situations instead of having them rely on mere equations and algorithms. Though equations can be used here as part of the problem-solving strategy, they need not be; instead, physical relationships between the quantities of mass, temperature change, specific heat, heat of vaporization/fusion, and energy are the focus and these are grounded in a graphical representation of energy storage and transfer.

This approach is a further development of the qualitative treatment of energy that we introduced on day 6, inspired by cognitive resources for teaching the energy concept. The energy bar charts, a.k.a. LOL diagrams, have been helpful for thinking about the energy transfers in systems, but today we related those transfers to several factors and attained a mathematical model for energy transfer during a temperature change, a melting/freezing phase change, and an evaporating/condensing phase change. The models we used included specific heat and heat of vaporization & heat of fusion. Many of the participants noted that they "would not cover thermochemistry topics like this until well into the second semester," but expressed appreciation for being able to fit it in sequence with the development of our chemistry model so early in the curriculum year. 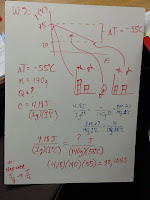 We deployed our models on some practice problems and reasoned our way to solutions on whiteboards before presenting to the class. We kept our problem-solving approach in terms of our model and connected what we were doing to what we had seen in lab already. That meant utilizing a heating or cooling curve to represent what was happening in the problem as a basis for our problem-solving. Dealing with thermochemistry problems by connecting heating/cooling curves to energy bar graphs and to the equations, made it much more manageable to think through the problem and minimize errors. Take this example problem where an 140g of water cools from 75 degrees Celsius down to 25 degrees Celsius. We solved this problem by first drawing a cooling curve to represent the situation, determining what type of energy transfer mechanism was at hand (temperature change or phase change) and then applying the correct relationship between the given quantities and the energy using the specific heat of water.

Other groups worked through problems that involved phase changes and the energy associated with that transfer, while other groups treated problems that had both a temperature change and a phase change. This allowed us to see how the heat of fusion/vaporization and specific heat could be dealt with in a modeling approach. We all agreed by the end that this would minimize the confusion of symbols and equations that some students encounter when trying to determine what to do to solve a complex problem of energy transfer in introductory thermochemistry units.

We discussed several ideas for lab experiments in which students could determine or work with specific heat for water as well as the heat of fusion. Though we did not complete an experiment of this type in our session, many teachers had one in their arsenal to fall back upon in their classroom. Many are available online, and some require very low-tech setups. One take home message that came from all our experimentation, practice and discussion was that you can only measure energy transfers, not energy storage, and we should emphasize that with students.

We started on unit 4, which deals with the physical properties of matter, and we launched into a discussion of such properties in tandem with a short movie on sulfur and iron in a mixture vs. a compound. After listing the physical properties that we had as part of our model thus far, e.g., boiling point, melting, point density, heat capacity, and heat of fusion/vaporization, it was on to defining a mixture vs. a substance and then separating a mixture of several substances based on their physical properties. We introduced the new physical property of solubility and differentiated mixtures that were homogeneous from heterogeneous; we examined mixtures that were in both the solid and the liquid state. The exploration into physical properties introduced us to several separation techniques, including gravity filtration, distillation, and chromatography. This start of the fourth unit went on with formally defining and differentiating between a compound and a mixture, and then with constructing particle representations of each.

Once we had assimilated compounds and mixtures into our model with the proper particle representations of each, it was on to begin quantifying this new component of our model using ratios. For example, in water, we know there are twice as many hydrogen particles compared to oxygen particles. (*Note: at this point the term "atom" has still not be formally added to the lexicon of our model.)  We examined empirical evidence for the ratio of hydrogen to oxygen in water, building upon our model as it pertained to gases, with a Hoffman apparatus demonstration of electrolyzing water.


Abstracting from this new evidence for ratios and the aspects of our model that pertained to gases and observations from the electrolysis of water, we reasoned our way to Avogadro's hypothesis. There were numerous steps in the process of getting students to arrive at this as well as at the conclusion that there must be diatomic elemental gases, but to enumerate them here would not capture the essence of the modeling approach to developing this part of the model. However, by the end of the day, we had arrived at the law of definite proportions, and almost all of Dalton's atomic theory. Following the development through a historical perspective has given me an entirely new outlook on the history of chemistry, which is sometimes glossed over in a fact-based manner, and is influencing how I will teach chemistry in the future.

For an online interactive way to experience some of what we went through in the workshop today, you can check out Dalton's Playhouse--or, you could always take a modeling chemistry workshop!