After two weeks of the modeling chemistry workshop, we finally arrived at a point today where the periodic table was introduced. Based on our sequence and model development, this point in unit 6 is the first time where classifying substances based on their properties and arranging them has full relevance to uncover a need for the periodic table. Yesterday, we introduced the property of conductivity of elements, but today we did the same with compounds and solutions. We found out that ionic compounds need to be dissolved in solution before they will conduct charge. This can be accomplished in the lab (kind of like this one) with solutions (salt, sugar, water, Gatorade, etc.) and probes or virtually using a PhET simulation. We compared the properties of atomic, molecular, and ionic solids in terms of the structural unit of each and connectedness between discrete units. This can be done using x-ray crystallography structural visualization software (freeware) called Mercury. The software allows you to look at a 3D model for the structure of different solids. As a class, or in groups, the students can complete the structure classification activity. Based on our observations and classifications of each, a formal definition for atom, molecule, and formula unit were developed. 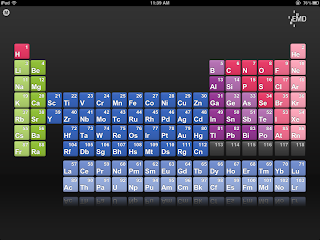 This led to a need for a way to communicate the properties of a compound and distinguish it through nomenclature from other compound types with different properties. Thus, naming and formula writing were introduced, along with chemical symbols, dealing with molecular compounds and ionic compounds, including polyatomic ions in some of the compounds as well. In contrast to what most of the teachers in the workshop described, this is much later in a typical curriculum year that these topics are introduced. Many traditional sequences start the year off with symbolism and nomenclature, not to mention the periodic table.

However, introducing the periodic table at this point in the model development allowed us to develop a model for ionic bonding that was not based on the good old drop and swap method algorithm. In the case of uncovering a model for ionic compounds, we relied on our knowledge of empirical formulas and definite proportions to determine the charges on various ions and piece together a way of understanding how they went together with other ions. It was very tempting to go into detail about electrons in the different ions or to elaborate on the bonding mechanisms, but that is not for this unit--that all comes later. For this unit, students merely arrive at a basic model for ionic bonding and covalent bonding; they keep to examples that fit the model at this point and later on will encounter instances where the model may need to be revised, e.g., transition elements in compounds or how polyatomic ions are formed.

Interestingly enough, there is not a delineated approach to teaching nomenclature in the modeling methodology, because nomenclature literally follows mere conventional rules. We discussed some different ways to make the teaching of nomenclature more accessible to students, including 'chunking' the different types of compounds that can be named, or choosing the order in which you teach molecular vs. ionic compound nomenclature to best fit your students. In the end, it turned out that this was one of the only things that is left up to the teacher's discretion for how they teach it in the modeling curriculum. The connection to the chemistry modeling curriculum is that the students will have arrived at a need for chemical nomenclature to readily communicate the type of compound and its properties before you teach nomenclature; this makes it at least more contextual than a mere set of rules of the chemical language. We know as teachers using the modeling instruction methodology that even the most seemingly direct instruction can be improved by making it into a discussion with whiteboarding and interaction, not mere lecture. So, regardless of how you choose to teach nomenclature, make your slant on it fit with your modeling instruction pedagogy as best as possible.

Our discussion wrapped up with brainstorming some ideas for teaching nomenclature in a non-direct instructional way, including POGIL activities and ChemQuests to give students a chance to think about the rules of nomenclature in a more critical way, discuss them with classmates, and then whiteboard to compare naming conventions.

Then, we tried our hand at some formula writing, nomenclature, and particle diagrams for some ionic compounds, but we will not whiteboard and present these until next time. You can check out how the whiteboards looked in this session in the next entry--Day 11 recap. Also on Day 11, we will be discussing Gregg Swackhamer's Cognitive Resources for Teaching Energy. This is a must read for any science teacher who has to teach the energy concept or work with any kind of quantitative topics relating to energy.