Today, the initial challenge was to create story boards that summarized the model development so far in each unit. The boards were to summarize the model with diagrams, pictures, graphs, but no word explanations. Essentially, a summary in pictures. We did this for units 4-7. Each group took a unit and summarized in on a board and then we presented them to the class to make sure we had a sense of the model development sequence. Kind of like a, "view from 20,000ft.," the model summary boards keep you grounded in the big picture of what's going on in the curriculum.

Since we didn't have an article to discuss today, our summary boards led us into a discussion that was philosophical in nature anyway. We discussed whiteboarding in our classrooms and how, if the students bought in to whiteboarding as we have in the workshop, students would be very self-directed in their whiteboarding practice in class. Whiteboards can even be a sub-plan after a class becomes facile with the technique. Students regularly have to whiteboard their homework and present to each other when the teacher is there, why stop this practice if there is a substitute teacher? It was suggested that you could simply leave an answer key to the homework with the sub for students' reference. A student could get to play the role of the teacher (class might vote to decide who will impersonate the teacher) and have them take photos of their boards and send to you (on email, twitter, or Google+) just for record. At some point during the year, students will take a more active role in questioning during whiteboard sessions, and they will be able to run a whiteboarding session to go over homework on their own without much, if any, prompting. This is an ultimate goal, to empower the students to be metacognitive enough that they can self-analyze and regulate their own examination of homework solutions and problem-solving strategies.

Next, it was on to unit 8. This was a dive into the deep end with stoichiometry. We introduced a teaching approach for stoichiometry that is known as the BCA Table. This method is a cognitive approach to tackling stoichiometry problems that will keep students grounded in the balanced equation and what is physically taking place in the reaction. The BCA Table approach is summarized in the following presentation, which is adapted from its original form, by Larry Dukerich: 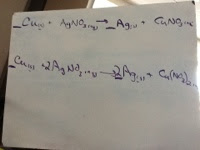 The unit 8 paradigm lab experiment for unit 8 places a copper wire into a silver nitrate solution. This was another multi-day wet lab, the first being the iron nail lab from day 11, where it's necessary to allow the reaction some time over more than one class period to proceed. Connecting this lab to previously learned content, models, and skills consists of having students writing the balanced equation for the reaction and predicting the products based on a model for this type of reaction. As it turns out, students will write two possible reactions that could take place, based on the possible ions of copper that could be present in solution. This leads students to inquire how they might determine which reaction actually takes place. Again, as with the the iron nail lab from day 11, students will be able to determine which reaction took place empirically based on the molar ratio of solid products and reactants in their experiment. It is important that during pre-lab, students are encouraged to keep track of mass data for all the solids in the lab and not just the two metals; both of the reactants (copper and undissolved silver nitrate) and the metal product (silver.)


This lab debrief can take a variety of directions, because so much precision is required in the technique of isolating the solid silver product, that uncertainty and lab technique could become a tangential focus of the discussion; however, it is important (as with any lab debrief) that the main focus is kept at the forefront of discussion. In this case, the main objective is to determine which reaction physically took place based on empirical evidence. Though uncertainty in measurement & calculation, as well as technique and sources of uncertainty are all points that should be considered in this lab debrief, don't allow them to become the main points. To initiate discussion, have all groups put their data into a single spreadsheet that can be displayed for the entire class to see at once. Have students report their molar ratios of copper:silver and silver nitrate:silver. Ask them to analyze the data for patterns and meaning, but to also consider what was physically happening in the reaction. Why didn't the reaction just continue making more silver; what made it stop? Focus again on the distinction between how many (mole ratios) and how much (mass ratios.) Keep students in perspective of the balanced reactions they wrote in pre-lab. It is the case that either of the following reactions took place, based on either the copper (i) or copper (ii) ion, respectively:

Based on the data, they should be pointed to consider which reactant to base their calculations of predicted amount of product on. Though they might choose either reactant, which amount can they be certain of in their calculations? Do they know that their mass of copper is all the copper that reacted? How about the silver? The reactant to product ratios, which they saw in previous labs can help determine how much reactant was used up and which reaction took place, can help to resolve this issue. They will inevitably see that silver nitrate was mostly (if not completely) used up in the reaction because the mole ratio of silver nitrate to silver they measured is about 1:1; and according to either possible balanced equation for the reaction, the silver nitrate to silver ratio should be 1:1. That means a close to 1:1 ratio of silver nitrate to silver in the lab implies their amount has a good degree of certainty for basing calculations upon. Going forward, they can base their calculations on the silver nitrate used in the reaction to predict how much copper would have been used in the reaction and then compare that to the amount of copper used they actually measured. When they see this comes out fairly close, they can then use the copper to silver ratio to determine which reaction took place.

Just like the discussion section of a traditional lab report, the post-lab discussion and debrief for this experiment is very meaty and should not be taken lightly. It is the chance to introduce the terminology limiting reactant, excess reactant, and percent yield in the context of the lab and their empirical data. Once they have a sense for the terms, and they've arrived at which reaction took place, they can calculate a percent yield for their experiment and discuss uncertainties in the lab. Once the lab objective has been achieved, students should conclude that it doesn't matter how much you use of the reactants, it will still proceed according to the balanced equation. This is the anchoring principle that they should have going forward into stoichiometry.

Once we finished our lab debrief, we practiced whiteboard questioning with BCA table method of solving stoichiometry problems. Many of us have really gotten the hang of questioning and whiteboard sessions after 12 days, and so we were ready today for some advanced techniques. We practiced questioning correctly done boards and differentiating between silly mistakes (e.e., accidentally omitting a 2 subscript on hydrogen gas to make it diatomic in an equation when the student knows better) compared to errors of major conceptual understanding. We agreed that not all whiteboards are created equal, nor do they all have errors or the same type of errors. Thus, we need to be prepared for all the possibilities.

We also discussed including other students in the questioning process, even going to the length that the teacher can whiteboard a problem solution and present it to the class and students can question them. The most advanced technique anyone had ever tried was to play the Mistake Game (explained in detail by the amazing Kelly O'Shea) where students purposefully (or accidentally even) embed mistakes into their whiteboard solutions and other students have to try and elucidate their error during presentation through questioning and discussion. Several other advanced techniques for whiteboards in the classroom were discussed and considered, including some from a "whiteboard ninja" named Bowman Dickson.

Definitely one of the most cerebral days in the workshop thus far. With unit summary boards, the introduction of stoichiometry, the BCA Table method, a limiting reactant lab done through inquiry, and advanced whiteboarding techniques, this was a modeling pentathlon for sure, but it was empowering and insightful nonetheless. Stoichiometry is one of the most nettlesome content topics to teach students and often becomes the make-it-or-break-it moment in many students' introductory chemistry experiences. Having a better way to teach stoichiometry is greatly encouraging!