Recently, I wrote a tweet to my students as they were working on building their cardboard boats for their upcoming project. In the tweet I encouraged students to send a photo of their boat construction to give our class Twitter group a "sneak peak" of what they had created. Not realizing the careless blunder of my tweet, and without the helpful micromanaging of autocorrect, I published the tweet for my 700+ followers and the world to see. Shortly thereafter, my phone went abuzz with a Twitter notification that I had a reply to that very tweet. It was from user called "Stealth Mountain" who I did not know.
Stealth Mountain's message to me was succinct, didactic, and poignant. It was a mere six-word tweet that informed me of my proofreading negligence. What was the message to me, you ask?
@MR_ABUD I think you mean, "sneak peek."
WOW! You could have hit me in the back of the head with a baseball bat, and I would have been less surprised than I was by this reply from Stealth Mountain. All at once, upon reading this tweet, I was dumbfounded and overcome with embarrassment & anger. Usually, I am very conscientious about my writing--even my tweets. Despite my ephemeral outrage at making the mistake and being called out for it publicly on Twitter, I was kind of impressed by Mountain's move and couldn't help but laugh, especially when I saw their profile picture.
I immediately deleted and reconstructed my tweet with the proper use of peek. After all, I am an educator and need to maintain my pedantic credibility with students by correctly using English grammar in my writing. After fixing my tweet, I wanted to do a little research into Stealth Mountain. What I discovered was both interesting and inspiring to me as an educator, even though I do not teach English Language Arts.
*Note: For the purposes intended here, I will personify this Twitter account as male, though there is no evidence to suggest the gender of Stealth Mountain.
A quick click on Stealth Mountain's user profile on Twitter reveals a description of himself that is short and sweet like his messages. It reads, "I alert twitter users that they typed sneak peak when they meant sneak peek. I live a sad life." Additionally, Mountain further describes himself in the Twitter profile as a "sneaky peak" and has an adorable angry-looking mountain peak with arms in the air for an avatar. Stealth Mountain currently has about 7,000 followers, follows no one, and has composed over 45,000 tweets. All, and I mean every single one, of his tweets are the same as the one he sent to me. Mountain sends them to everyone and anyone on Twitter in the same way to inform them of the confusion of the term peek with peak. Clearly, this dedication to eradicating the misuse of a single phrase is a passion of Mr. Mountain's. Is he an English teacher somewhere, just an average citizen who is fired up about grammar, or is Stealth Mountain is atoning for a mistake he himself once made with peek and peak? At this point in my investigation, I was hoping this was an educational project of some sort.

Diving deeper into researching this guy, a look at Stealth Mountain's Blog doesn't reveal much more. There is only one post, and it simply restates his Twitter profile declaration. At this point, going back in forth in my mind was the repeated correction of "sneak peak" in his tweets. This recurring theme kind of reminded me of how Bart Simpson was forced to write the same thing over and over again on the chalkboard to teach him a lesson. 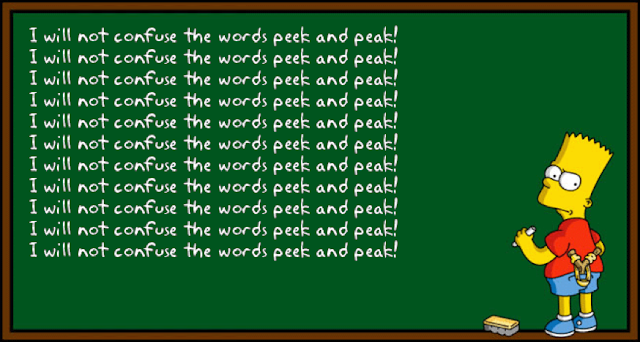 My hopes were lost when I did a follow up search online and discovered that @StealthMountain is a really unique Twitter Robot created (hopefully) for grammatical good. Although a person actually could manually accomplish the same task, it turns out that Mr. Mountain is just as facile with technology as he is grammar. A second search of the web confirmed that this was indeed the work of a bot.
The specific Stealth Mountain Twitter Bot automatically sends those messages to the users via a search algorithm that scours Twitter for the misused phrase in others' tweets. On a purely human level, I'm glad this is not the work of a person, because if it weren't a Twitter Bot, then he is not just a "sneaky" but an impossibly busy peak tweeting at all hours of the day and night.
Following my discovery that this is in fact a Twitter Bot, a brief "peek" through this "peak's" timeline on Twitter and blog comments verified the conclusion, because @StealthMountain does not discriminate to whom he sends the corrective message. Being a Bot account means there is no question of who will receive the message; however, the account does have favorite tweets. The favoriting of certain tweets and response conversations likely comes from the account manager, as it is a more subjective action to pick a favorite. That is actually the far more interesting part of this story and brings the human element back into it.
Stealth Mountain favorites some of the responses he gets to his tweets from users when they reply to his admonishing message about confusing peak and peek. These favorites are quite entertaining, too. One of the most interesting conversations I saw in browsing his favorites came from a fledgling Twitter user who calls himself @JKony2K12 who tries to play out the Joeseph Kony thing in all their tweets. With the current trend of attention the #Kony2012 campaign is getting with my students, and worldwide, this particular conversation caught my attention. Certainly not to make light of the situation surrounding the Joseph Kony story, you can see the brief conversation and how it turned out yourself. You can also search Stealth Mountain's favorites or the web for some other angry conversations with @StealthMountain.
For all the tweeting that this bot does; for all the reviewing of responses that the account manager accomplishes; and for all the consternation that @StealthMountain causes in his victims, it's a pretty productive and constructive use of social media and technology. The moral of this story, however, is that once @StealthMountain grammatically snipes you on Twitter, you will probably never make that same error again in your writing.
Musician Carrie Underwood recently posted a tweet to her more than 123K followers on March 9th encouraging them to catch a "sneak peak" of her new music video...
It's only a matter of time, Carrie.